2020 Year in Review: The Awesome, the Terrifying, and Reasons for Optimism in 2021 No one saw 2020 coming. But while you won’t hear many of us lament the coming New Year, looking back at the past nine-plus months helped us here at FloQast put things in perspective — and get fired up about what’s to come in 2021.

Since it’s the season for end-of-year lists and years-in-review articles, let’s take a look at a few exciting moments the FloQast team saw in a tumultuous 2020.

For a few years, FloQast was seen as the solution for scaling accounting teams looking to implement something quickly and effectively, while ensuring immediate staff buy-in and visibility for leadership. But as those businesses reached heights that even some of their founders and investors could have only dreamed of, they realized that FloQast had helped facilitate that growth and scaled with the company along the way.

In 2020, FloQast saw nearly 20 clients successfully IPO. Some of the most substantial initial public offerings use FloQast, including ZoomInfo, DoorDash, BigCommerce, and Snowflake, among others.

Additionally, companies using FloQast raised well over $100 billion over the course of 2020. That’s not a typo: $100 billion. 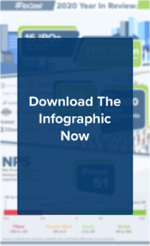 Earlier this year, FloQast celebrated its 1,000th customer. As the year went on, though, we saw our user base — the number of accountants using FloQast — jump significantly.

To keep up with the flow of new users, FloQast is adding to its world-class Customer Success Team If you know someone interested in joining the team, head over to our careers page to learn more about the many new opportunities at FloQast.

The Net Promoter Score is a way to measure customer experience of a specific brand. Seems pretty basic, right?

Now, think about the company you admire the most. Were you thinking Amazon? Their Net Promoter Score is 7. What about Netflix? 13. Maybe you thought Facebook. Their score would be -21. The gold standard? Apple, with its 47 Net Promoter Score.

FloQast has them all beat, and it’s not particularly close.

Interested in learning more about the companies using FloQast, the jump in accountants relying on the app, and the company's Net Promoter Score? Read on!